“Passenger numbers on public transport have continued to recover from the pandemic and in certain parts of the UK, such as Manchester, our buses are as busy as they were before COVID-19. We are encouraged to see so many people using buses and trains and we expect a busy summer ahead, particularly in tourist areas.”

In our Regional Bus division, we have continued to see a steady recovery in passenger demand, with commercial volumes across the business now over 85 per cent of pre-pandemic levels. In some areas, we have seen particularly encouraging volumes in recent weeks, with pre-pandemic volumes being recorded on some days. These trends give us confidence in the continuation of passenger recovery in the coming months.

The Board now expects Regional Bus to deliver operating profit before exceptional items ahead of that of the prior two years.

Our London & International Bus division will benefit from performance that is ahead of plan in London and Singapore, including better than anticipated Quality Incentive Contract (QICs) payments in London In Sweden, Flexbuss, which we acquired in April 2022, is trading positively and in line with our expectations.

The Board now expects the division to deliver operating profit before exceptional items at least in line with pre-pandemic underlying profitability levels (2019: £51.2m).

Following the successful commencement of GTR’s new National Rail Contract on 1 April 2022, the Board expects UK Rail to deliver operating profit before exceptional items within the range set out in the Group’s interim results of £25m - £30m.

In Germany, we continue to progress our improvement plans in Baden-Württemberg, although financial penalties relating to operational performance have been slightly higher than anticipated in the period. Following discussions with our client in Baden-Württemberg, we are pleased to have reached a memorandum of understanding which will result in a modest improvement to the financial performance of the contract over its life. Further negotiations remain underway.

The first of two contracts in Bavaria started on 12 December 2021 and the second will commence in December 2022. Following the successful mobilisation of the first contract, performance has been in line with our expectations.

Mobilisation of the second contract in Bavaria remains underway ahead of its commencement in December 2022. As previously indicated, there are inherent uncertainties and risks associated with the mobilisation of this contract and in estimating the impact of key success factors including driver recruitment. As part of our year end procedures, we will be carefully reviewing the projections for the second contract in Bavaria and assessing the requirement for any potential further provision.

As announced on 28 June 2022, a new agreement was reached between the Norwegian Railway Directorate and Go-Ahead Norway A/S, regarding the structure of its rail contract. Under the original contract, which began in December 2019, the revenue risk associated with changes in passenger demand rested with Go-Ahead. During the COVID-19 pandemic, the Norwegian Government provided financial support to rail operators, preventing material losses.

The amended contract takes effect from 1 July 2022 and runs for the duration of the original contract, until December 2027 (plus a two-year extension option until December 2029). The contract provides a revenue support scheme until the end of the contract. The amended contract also includes an incentive scheme linked to revenue growth. As a result of these improved contractual arrangements, the Group expects to significantly reduce the £66.2m onerous contract provision relating to its rail operation in Norway in its full year results for the year ending 2 July 2022.

The Board expects International Rail to deliver an operating loss before exceptional items within the range set out in the Group’s interim results of £15m - £20m.

The Group has a strong balance sheet and maintains good liquidity. The Board continues to expect FY22 adjusted net debt/EBITDA to be at the lower end of the 1.5 to 2.5 times range, significantly below the 3.5 times bank covenant.

Overall, the Group expects to report a good performance for the year ended 2 July 2022.

Certain statements in this announcement constitute profit estimates for the purposes of Rule 28 of the City Code on Takeovers and Mergers. Further details on the basis of preparation of the profit estimates and certain confirmations from the directors of Go-Ahead in relation to the profit estimates can be found in the scheme document published by Go-Ahead dated 11 July 2022 which is available at https://www.go-ahead.com/investors/offer. 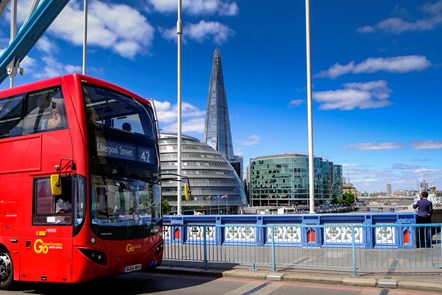